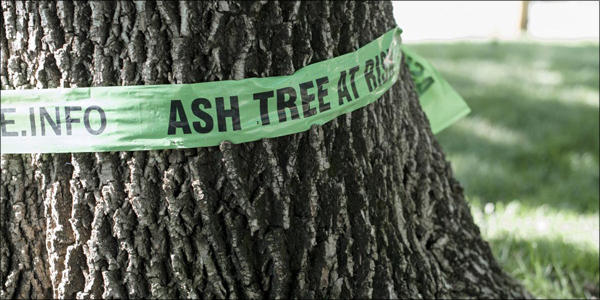 What is the Emerald Ash Borer

What is the Emerald Ash Borer

The emerald ash borer, Agrilus planipennis Fairmaire in Latin, is an exotic beetle that originated on the Asia continent. Also referred to as EBA, the beetle was first discovered in United States in the southeastern region of Michigan, in the Detroit area, during the Summer of 2002.

It is speculated that the emerald ash borer found its way into North America on wood packing material, made of ash, carried on airplanes and cargo ships that originated from the beetle’s native Asia.

The adult beetles eat the foliage of ash trees, hence its name, but cause little actual damage to the tree. However, during the beetle’s immature stage, the larvae feed aggressively on the tree’s inner bark and interrupt the ability of the tree to transport water and nutrients. This often results in bark splitting and the tree dying.

Adult beetles typically come from the previous year’s infestations, sometime in May, but can appear earlier if the weather is unseasonably warm. Females will lay their eggs shortly after emergence. Once hatched, larvae will bore into the tree, leaving visible tracks underneath the bark while feeding. Smaller trees may die off within two years of infestation with larger trees dying off within four years.

Since its discovery in Michigan, the emerald ash borer has killed millions of ash trees across North America. As of October 2018, the emerald ash borer has been found in 35 states as well as six Canadian provinces. The has resulted in municipalities, property owners, nurseries and forest industries suffering hundreds of millions of dollars in damages.

The EBA infestation has caused U.S. and Canadian regulatory agencies to mandate quarantines and impose fines to prevent potentially infested ash trees, logs and firewood from being transferred from locations where the beetle is found.

Description
With adult EBA typically being only 1/2-inch long, the emerald ash borer is shorter than the width of a dime. However, on mass the larvae of the bright metallic-green beetle is capable of taking down trees thousands of times its size. The EBA’s eggs are approximately 1/25-inch long and are reddish-brown in color. The immature beetles are white with flat heads and distinct segmented bodies.

The Threat
Ash trees are one of the most abundant and valuable tree species in North America, with the total number of ash trees in the U.S. alone estimated at approximately seven to nine billion.

All of these materials can spread EBA infestation even if the beetles are not visible.

Nebraska
The EAB has destroyed thousands of ash trees causing millions of dollars in damage in Nebraska alone and tens of millions of dollars in damage across the rest of North America. On June 6, 2016 Nebraska joined its neighboring states of Colorado, Iowa, Kansas and Missouri to find and infestation of the emerald ash borer. This made Nebraska the 27th U.S. State to confirm the presence of the beetle when the Nebraska Department of Agriculture found the EBA during an inspection of Omaha’s Pulaski Park. The agency also found the emerald ash borer in Lincoln and Ashland, Nebraska in August of 2018.

Treatment Options
While there is a chemical emeril ash bore treatment that serves as a control measure, there is no sure-fire cure for the spreading EBA infestation. Due to varying pesticide regulations of each state, landowners should consult their local extension office or state department of agriculture for directions.

It is not recommended that infected ash trees be chemically treated as a preventative measure, unless the trees are located over 15 miles from a confirmed infestation. As trees may only be treated with chemicals a limited number of times, waiting until you are in the quarantine area will maximize the number of times trees can be treated.

Treatment of ash trees to prevent EBA damage is done between March and mid-June. This allows the chemical treatment to be dispersed throughout the tree to most effectively kill the beetle larvae. In addition to chemical treatments, since 2007 three wasp species have been used as a biological control in several states.

Other Things You Can Do
The United States Department of Agriculture offers the following guidelines for managing EBA infestations:

• Inspect your trees and contact your state agricultural agency if you see any signs of ash borer infestation.
• Call the Ash Borer Hotline at 1-866-322-4512 or your local USDA APHIS office if you find an EAB infestation. You can find the contact information for your local offices on the USDA’s website.
• Take pictures of the insects, tree damage and make note of the area where you found the beetles.
• Don’t transport firewood from your property or move it across state lines.
• Buy and burn firewood locally.
• Buy kiln-dried firewood, if possible.
• Avoid ash firewood.
• The best preventative emeril ash bore treatment is to burn any remaining ash firewood supply before the weather warms to eliminate the spreading of EBA to live trees.
• Inform others by talking to neighbors, friends and co-workers about the emerald ash borer and what they should look for.
• Learn the point of origin and the supplier when receiving ash firewood or ash stock from a nursery.
• Learn the local and federal regulations that govern the states you may visit.
• Heed the local quarantine restrictions to avoid transporting infected ash wood or live trees.